Posted on November 9, 2012 by livinginagrownupworld

Since this week was election week, we can celebrate the victory of the candidates, as well as celebrate the END OF CAMPAIGN ADS ON TV YAY! I am particularly excited about this, as I hate those ads! 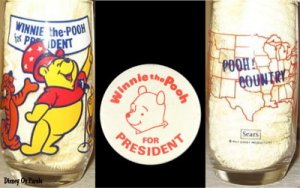 But here is a candidate I can really get behind – Winnie The Pooh! Pooh ran for president at the Magic Kingdom back in 1972, as the candidate for the Demo-Pooh-biclan Party. He was all for disclosing the ‘bear facts’ and bottomless honey jars. Pooh was assisted by his campaign manager Eeyore and his press secretary Tigger.

When I stumbled across this on the Disney Parks Blog, I thought it was too cute not to share!