Posted on March 25, 2016 by livinginagrownupworld 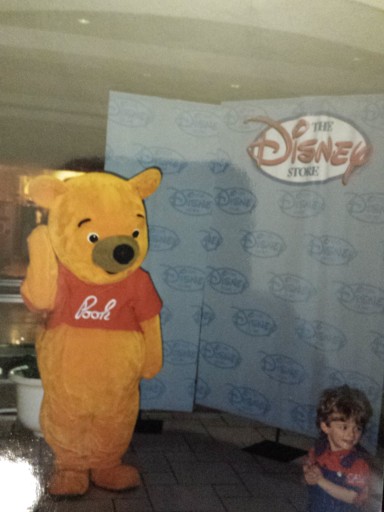 I remember when a new Disney Store opened, or sometimes they had special events – and they would bring in characters and you could do a meet and greet – just like at the Parks!

Here’s a few from my family’s (MANY) Disney trips over the years:

When you went on a Fishing trip at Disney, they used to take Polaroids of you with your catch (that was in the pre digital days, of course)

I give this guy (my dad) a LOT of credit – not only did he plan a yearly trip to Disney World for us, but he was a pro at finding characters and planning things so that I got to meet all my faves. And this was in the days before the internet, before you could just pull up an app on your smartphone to tell you where Mickey would be – so he really put a lot of work into making these trips awesome for us all

T.G.I.F. Pic Of The Week – Starbucks Has Landed!

Posted on September 20, 2013 by livinginagrownupworld

Here is a peek at what the New Starbucks locations look like at Walt Disney World:

The Main Street Bakery still sells baked goods, some are the typical Starbuck’s scones/cakes, but Disney originals are mixed in there too!

Obviously they can’t just have a regular old Starbuck’s cup, gotta incorporate the Mouse in there too somehow, right?

Personally, I am somewhere in the middle of loving and hating the idea of Starbucks invading Disney – I mean, they are everywhere else already, so why not at Disney, right? And I do love a good latte, so I think this is likely a good change, and I look forward to checking it out in person when I head to WDW this December!