Posted on October 29, 2012 by livinginagrownupworld 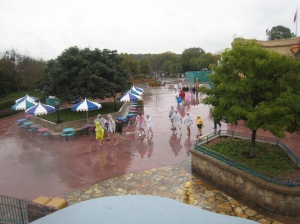 As Hurricane Sandy is currently threatening to wreak havoc on all of us living on the Eastern Seaboard, I got to thinking about the weather in Orlando, and specifically what to do when it rains while you’re at Walt Disney World (cuz chances are pretty good that it WILL rain at some point while you’re there!)

There are a lot of rides that are mostly indoors, so should you find yourself in the rain, head over to some of these attractions to help you stay dry (and have fun at the same time!):

Animal Kingdom
-It’s Tough To Be A Bug
-Dinosaur

Some of the above attractions have line queues that are partly outside, but most of them at least have a partially covered line, and once you get inside you can dry off!

Above all, be prepared – bring your ponchos with you, and remember – it will probably pass in an hour, so just tough it out! You can always run for cover into one of the MANY WDW souvenir shops if you aren’t in the mood for a ride!